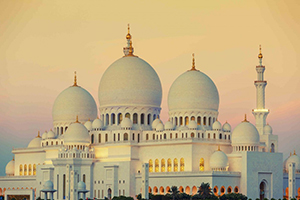 Dubai is blessed with a rich cultural heritage and these are reflected in the popular monuments in Dubai. Dubai is popular for its mega structures, stunning skyscrapers, historic sites and monuments which have caught the attention of every tourist all these years. These historical monuments, museums, buildings or landscapes is a testimony of the rich heritage of the UAE. We have suggested you the top historical places in Dubai which you should definitely visit during your trip to Dubai. 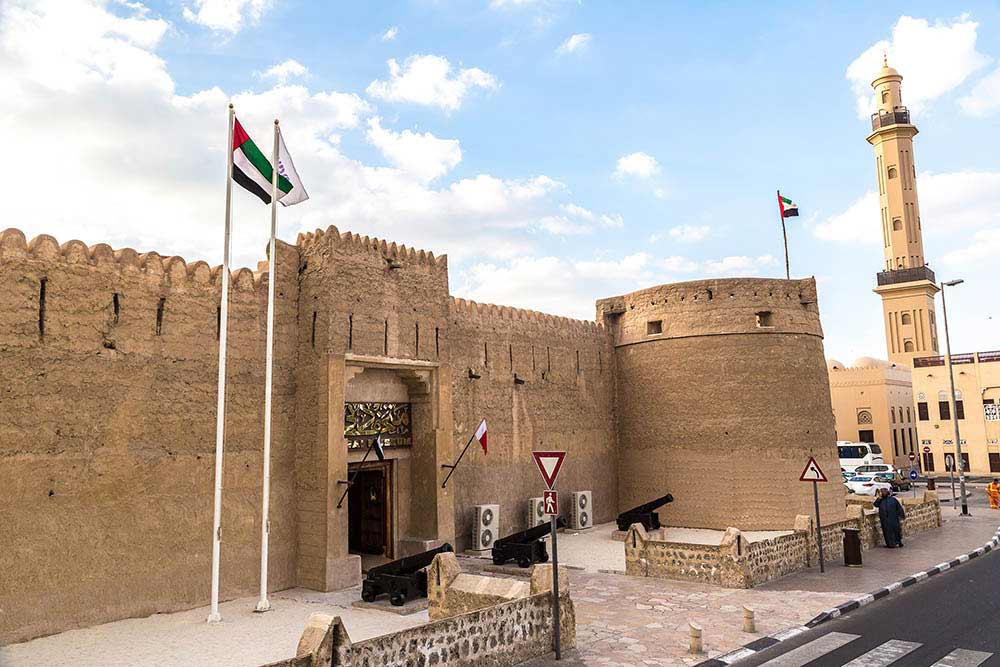 The Al Fahidi Fort was established in the year 1799 and this is on record the oldest building still standing strong in Dubai. This fort was initially built to prevent the foreign invaders from entering the city. This spectacular fort is now termed as the Dubai Museum. A visit to the Dubai Museum is a wonderful way to explore the rich heritage and culture of Dubai since its inception in 1971. The grand collection of old maps of the Gulf and the Emirates is placed at the Museum entrance, which showcases the urban expansion of Dubai from 1960 to 1980. Dubai Museum would also take you around the wonderful history of the desert life, ancient Arabian homes, fishing, pearl diving, mosques, and trade. Also, you would find old weaponry and musical instruments which are developed using goatskin kept as artifacts in the museum. 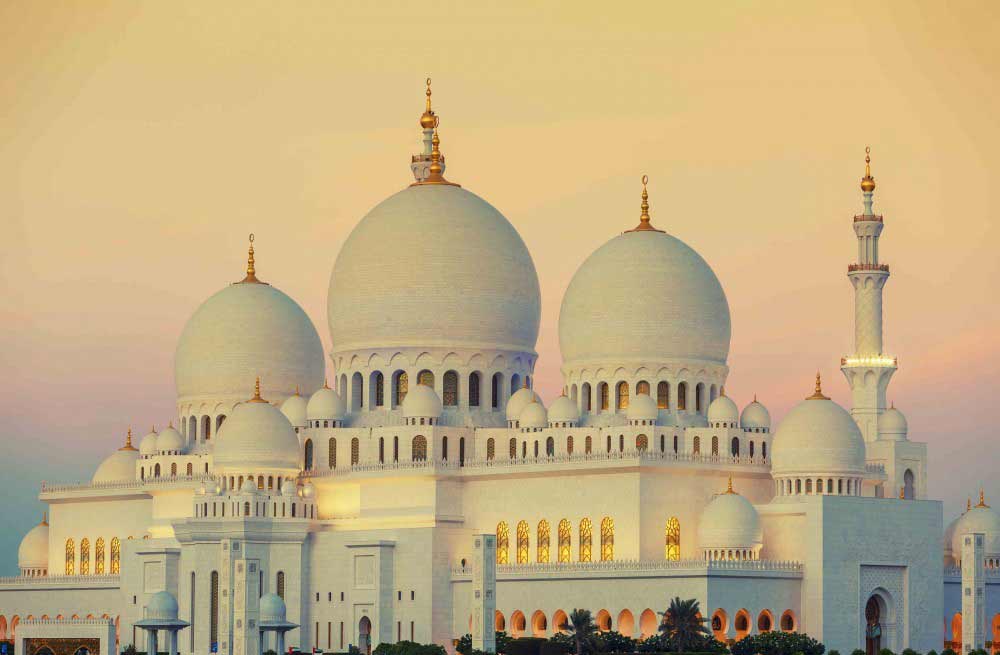 Placed near the Ruler’s court on the Bur Dubai side of the Creek, this grand mosque was built in the year 1900 and then restored again in the year 1998 with a traditional architectural design. Standing tall at 70 meters only, this is now the tallest minaret in Dubai. There are 45 small domes which support the structure along with nine large ones which display the stained-glass panels that make it one of the prominent places of worship in Dubai. A look at the fascinating interior designs will leave you spellbound. Traditional Persian designs like the domes, sand-hued facades, sky-blue mosaic, wooden shutters, handmade stained-glass, etc. were used to build this architectural wonder. With a capacity of 1,200 devotees at one time, this mosque still stands as a landmark of the religious and cultural life in Dubai even though it is a century old structure. 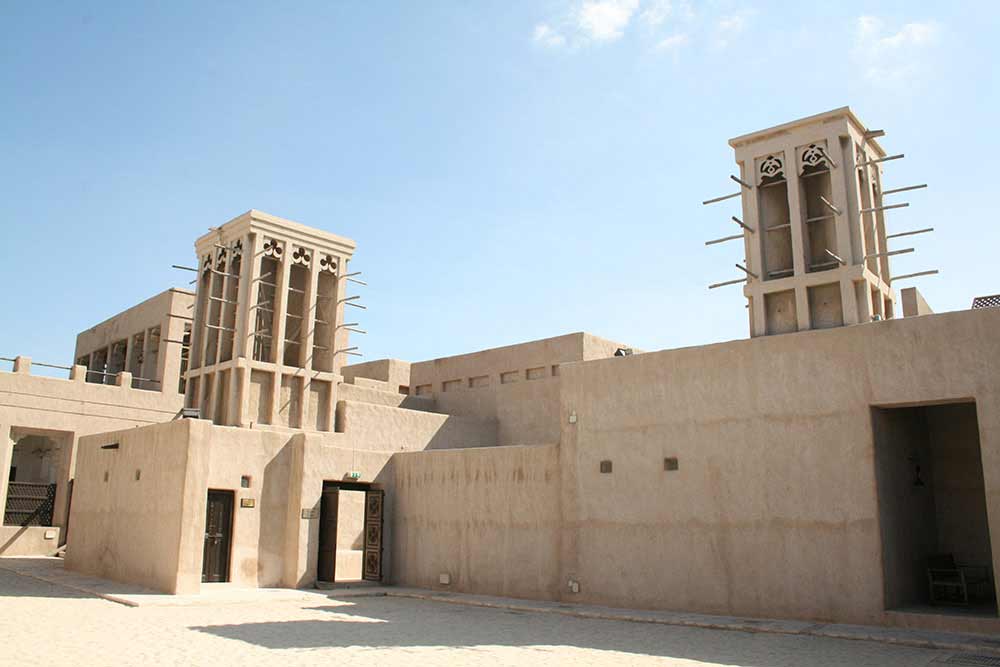 One of the historical buildings in Dubai and also the former residential quarters of Dubai’s former ruler, Saeed bin Maktoum Al Maktoum. Placed along the Dubai Creek in Al Shingagha, this architectural feat was built in the year 1894 and set as a base of the Al Maktoum family. At present, it houses artifacts and photographs of ancient Dubai. A spectacular restoration project was carried out which showcased the fabulous history and amazing transformation of Dubai.

Suggested Read: The Story behind the Dirham in UAE’s History 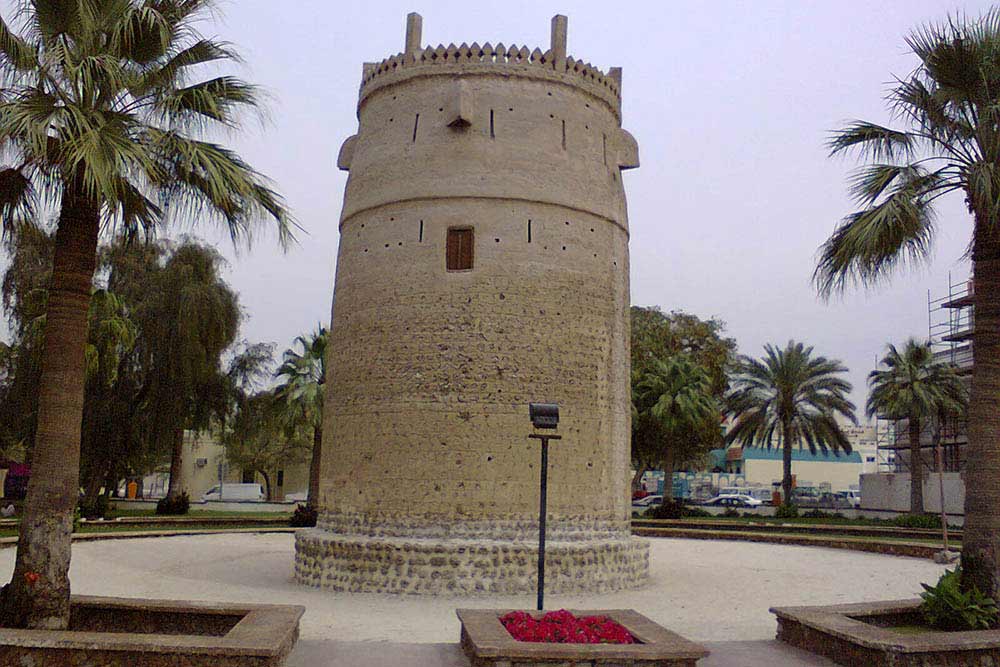 The year 1870 marked the foundation of the iconic Burj Nahar. Positioned in the Deira, the three watch towers were used for defending the Dubai city against foreign invaders. One of the must-see attractions in Dubai, this monument features beautiful scenic gardens coupled with exotic surroundings that offer a wonderful backdrop for capturing these precious moments. The Burj Nahar welcomes several tourists from all over the world each year. 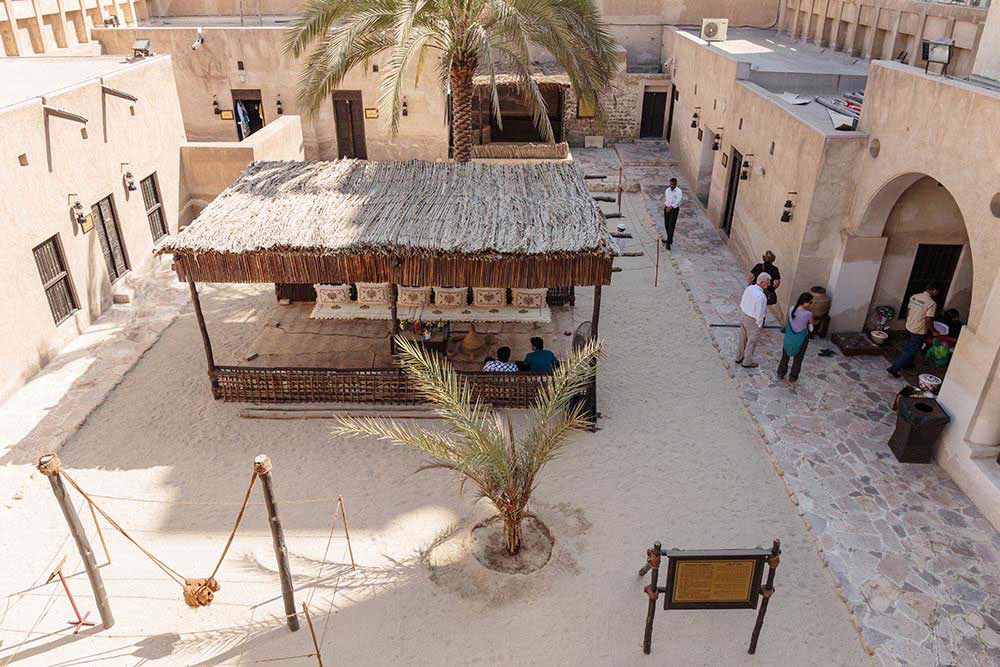 This ancient monument was constructed in the year 1890 before being restored in the year 1994. Initially, it was a rich pearl merchant’s home, tourists and guests are welcomed with a traditional Emirati snack like tea and chick-peas. Inspired by traditional designs of Bastakiya building, the house is patterned with coral and gypsum. There are two floors which overlook the beautiful Arabian courtyard and all the rooms including the Majlis (guest rooms), main living rooms, and the individual rooms of the family members are customarily decorated. 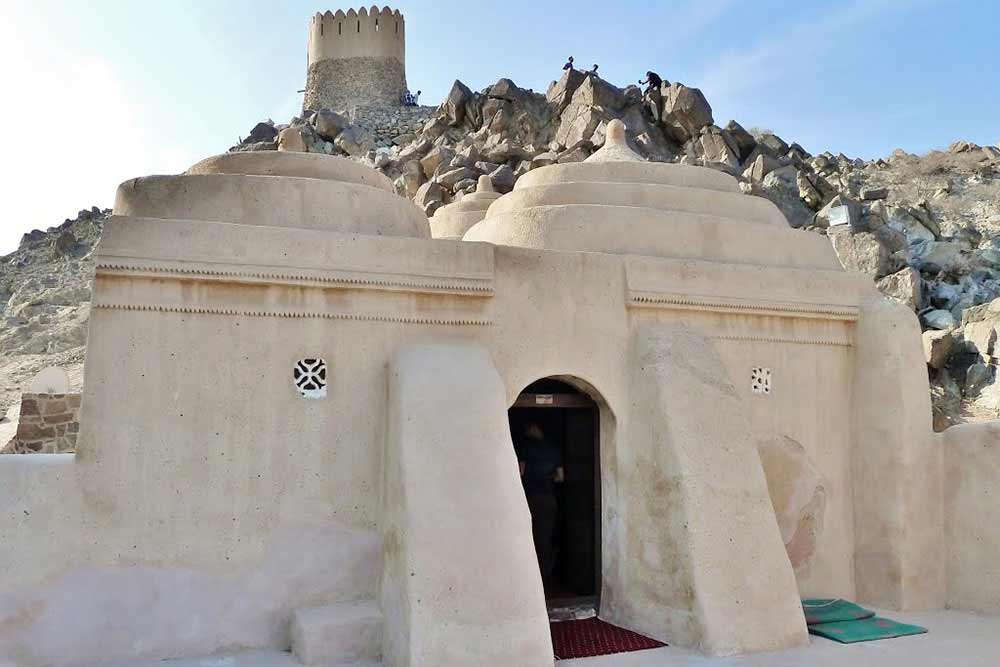 Popularly referred as the Ottoman Mosque, this is one of the oldest mosques in the UAE. The inception date is still unknown, but there are rumors that this is a 15th-century architecture. The Al Badiyah Mosque welcomes visitors and guests from all over the world. Devotees come here to pray and offer sacrifices.

This ancient ruins and archaeological site gives you a rare chance to witness the ruins and artifacts from the 6th Century A.D. The remains from the site is said to be somewhere between 3rd to 6th Century A.D. during the Persian Sassanid empire regime conquered the Umayyad dynasty in the 7th century with the arrival of Islam in the Gulf. Once a trade and commercial hub due to its strategic position between Oman and Iraq. Some visible remains include ruins of stone walls, storehouse, a souk, and antique houses, including the residence of the former governor. There is also a variety of ancient tools like glassware, pottery, metal coins, etc. on display. 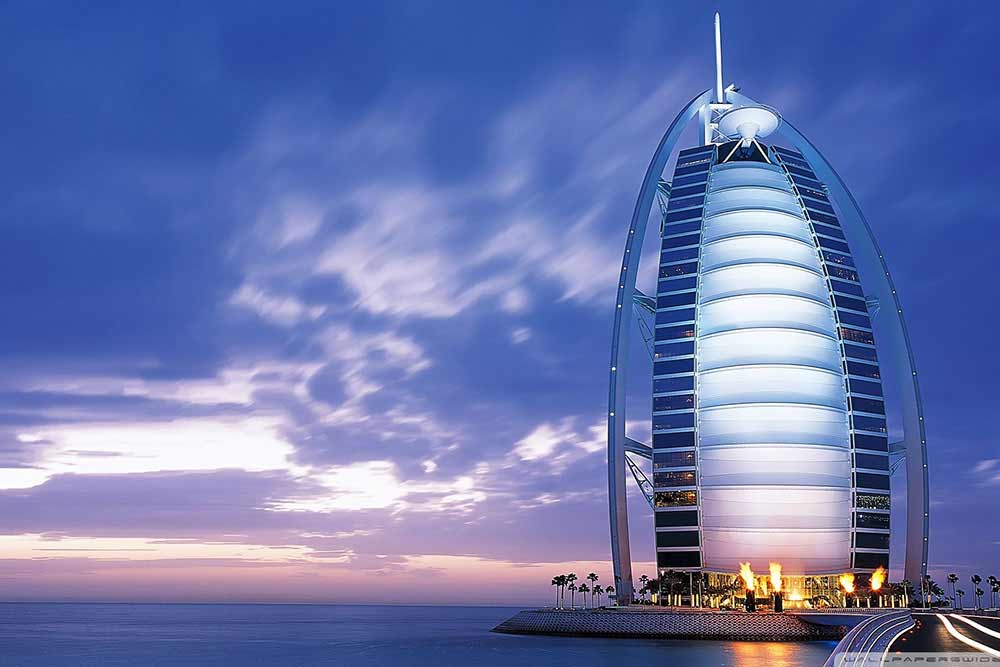 A 5-star rated hotel which is regarded as the only 7-star rated hotels in the world. The Burj Al Arab was built on an artificial land 321 meters above sea level offshore that resembles the shape of a sail. On records, this is the second tallest building in the world that is exclusively dedicated to the ultra-luxurious and the super-rich. The hotel’s interiors and exteriors ooze opulence to the core. The iconic structure is designed in such a way to symbolize the urban transformation of Dubai in the form of a sail boat. 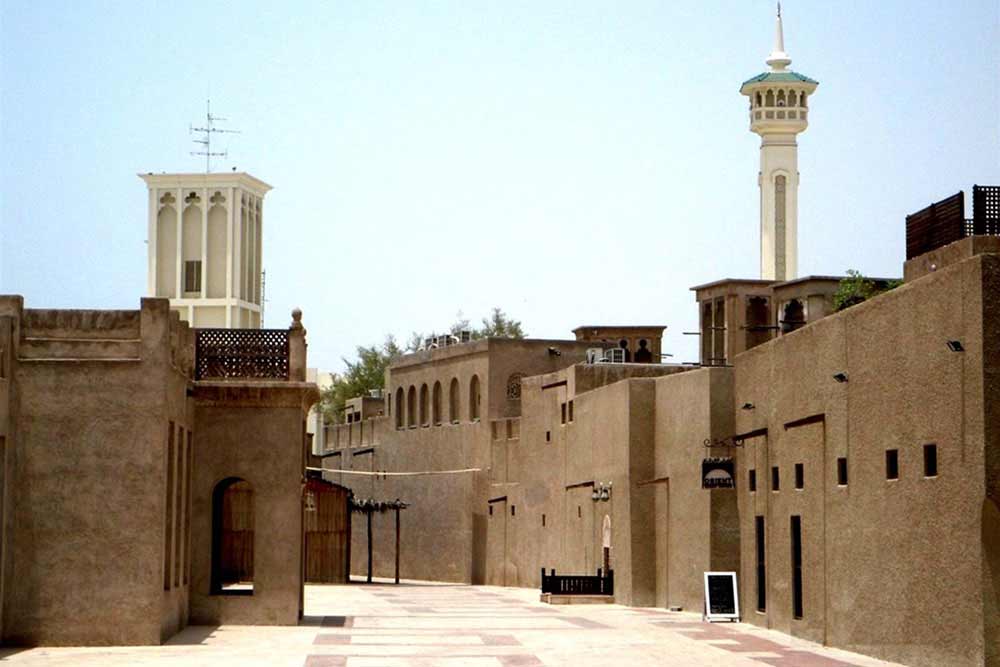 Placed in Bur Dubai, this is one of the oldest ancient places in Dubai. The name has been inspired from the Iranian town named Bastak. The Bastakiya Quarters has preserved the traditional wind tower quarters that are left in the region. These wind towers not only stand as an attraction but also help in providing ventilation inside the house and acts like an air-conditioning system in the previous era. Although the exterior of the houses may be rough, the interiors are glittery and appealing with the superficial decorated courtyard being the star attraction. 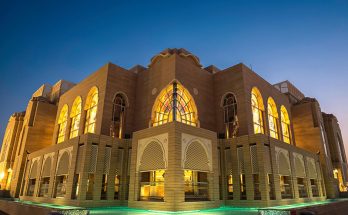 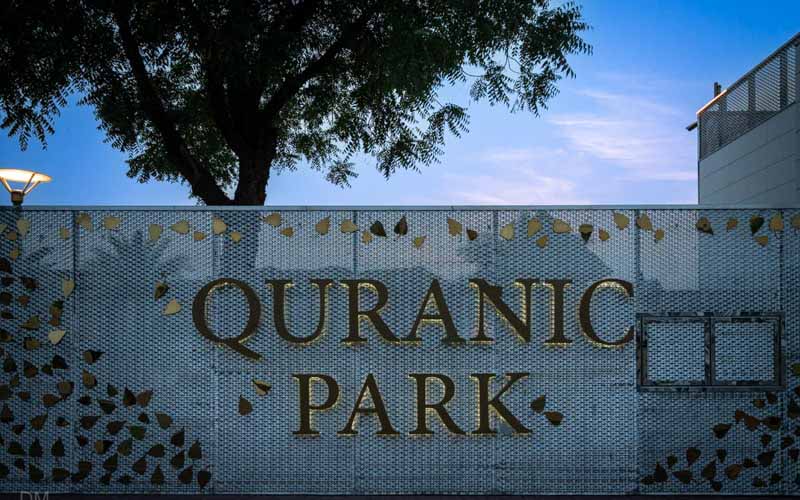 The Complete Guide to Quranic Park in Dubai 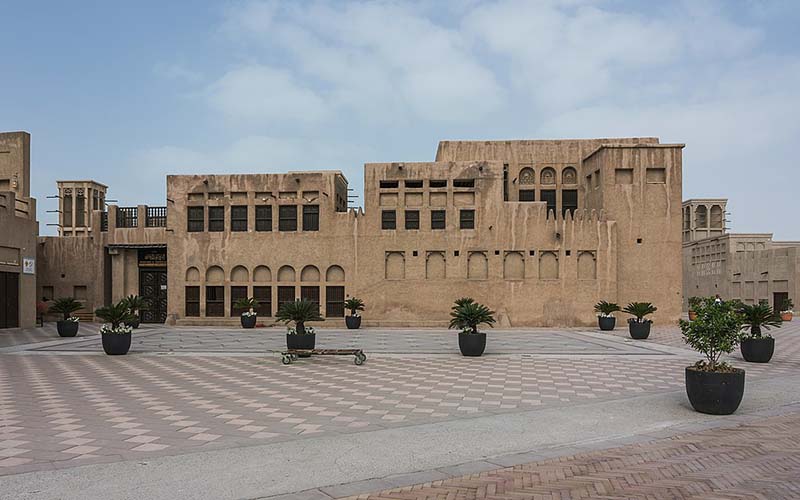